If you wish to follow along, you can find PBIX/Excel files at the bottom of the article.

Microsoft certified expert in the field of Business Intelligence. His biggest passions are DAX, M, and data modeling.

Lineage is a part of DAX mechanics that enables us to use tables as filter arguments for the CALCULATE function. It’s also used in row2filter context transition and other aspects of the data model that involve filter propagation throughout the model. We can state that lineage is the possibility to filter the data model based on physical or virtual relationships.

The easiest way to explain this concept is through an example. We will use the following 2 measures to compute sales of only Black color.

CALCULATE argument is now a list of values that have no real connection to a data mode, meaning the result of the FILTER function has no impact on the calculation.

What can break the data lineage?

Using a UNION function is one way to break a Lineage. Other most known are: 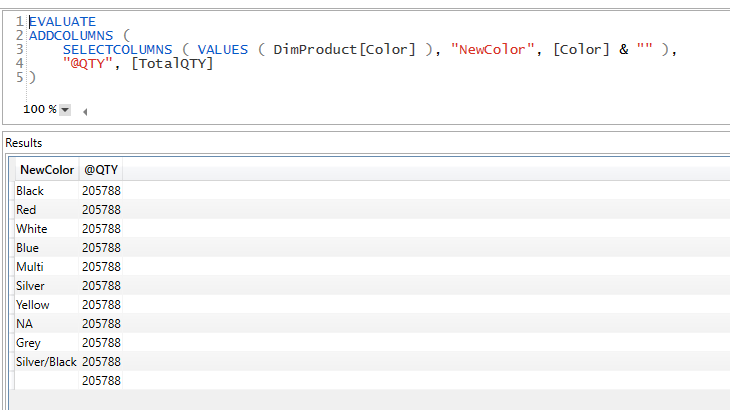 Trying to use a result of an expression as a filter

To explain this concept we will try to find the MAX product key under a given filter context (this calculation is used solely for the purpose of explaining the concept, it has no real-life application). Then we will use a result of a measure to transfer that product key to the Forecast table. The model looks like this:

We will use the following measures to explain the difference.

As we can see in the picture above, there is no difference between the results of [TotalForecast QTY] and [MaxProductForecast Wrong] measures. In the [MaxProductForecast Wrong] we tried to use a scalar result of a measure (transformed into a table object with the use od {} brackets) as a filter for the CALCULATE argument. This won’t work because using measure results cannot be directly used to form a filter context. But with a slight adjustment to the code, we can introduce lineage to the calculation above and force the scalar result of a measure to become a proper CALCULATE filter argument.

To force lineage execution we can use a TREATAS function. When used as a CALCULATE argument, TREATAS can supply a list of active values for the selected column/s. Following is its syntax:

In case you supply multiple columns table as a first argument, you have to supply an equal number of columns from the data model as Column arguments. The order in which you supply columns also matter and has to be the same as the order of the table columns in the first argument.

To force lineage in the above example, we can use the following measure.

As we can see in the picture above, [MaxProductForecast] now computes a correct result for each MAX product. We used TREATAS to force measure result to become a table result applied to a Forecast[ProductKey] column.

TREATAS in this manner is mostly used for code optimizations in certain situations and in more advanced DAX coding.

The basic usage of TREATAS function is to form a virtual relationship between the table supplied as a first argument and columns of the data model. In case the table in the first argument has more than one column, you need to provide the same number of columns in TREATAS second arguments.

For example, if we have a discontinued table such as Forecast one in the data model below, we can still filter it using TREATAS.

We want to move DimProduct[ProductKey] and DimDate[Year-Month] columns from the data model onto a discontinued Forecast table. We will use the following 2 measures.

As we can see, [TotalForecastQTY] doesn’t filter the Forecast table and shows always the same figures.

[ForecastQTY_TREATAS] uses SUMMARIZE to form a virtual table with 2 columns having grouped values from the data model (DimProduct[ProductKey] and DimDate[Year-Month]). Then we use that values as a set of filters for the Forecast[ProductKey] and Forecast[Year-Month] columns.

We can now clearly see that there are 356 quantities of non-matched values that are not being shown if we use TREATAS to move the filters virtually. With relationships in place, the missing quantity is summed under the blank row that was automatically added by the engine to handle missing relationships.

TREATAS what to be aware of?

TREATAS is a function that can help you set the lineage over disconnected tables or reinstall it if it is lost due to specific situations mentioned above. That being said, you need to understand its applications to the data model, which are the following:

If you are a novice looking for a better explanation of any element of the topic, feel free to comment on the part you didn't quite understand!

If you are an expert in DAX and believe certain topic lacks important internals, your comments are more than welcomed!

GET LATEST BI NEWS TO YOUR INBOX

Receive the latest updates on all business analyst news across all platforms.

Variables are used in almost every measure you will create. The reason we introduce them last is that they use all other parts of DAX code to produce faster, more powerful and maintainable code. Variables are like containers of a part of the DAX code which can be used throughout...

Explanation ALLSELECTED is one of the most complex functions in DAX. When used improperly it can lead to unexpected results. As a rule of thumb, you should not use it in iterative functions. It is preferable to use it only as a CALCULATE filter remover, not as a table function....

What is Lineage? Lineage is a part of DAX mechanics that enables us to use tables as filter arguments for the CALCULATE function. It’s also used in row2filter context transition and other aspects of the data model that involve filter propagation throughout the model. We can state that lineage is...

Crossfilter is a feature of DAX when it filters the underlying dataset even though there aren’t any visual filters present. Introduction In this example, we will explain a very important feature of CALCULATE filter arguments. We will also explain why you should always prefer the combination of ALL/REMOVEFILTER + VALUES...

Designed and powered by Adssential